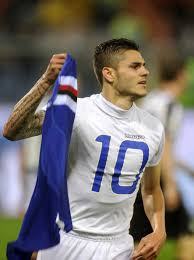 Icardi’s contract with the Nerazzurriends in 2021, but there is no agreement in place between him and the club to extend the deal. With interest coming from Juventus and a host of premier league side, InterMilan are afraid of losing their hitman.

Afterbeing accused of trying to get more money on behalf of her lover, Nara couldn’t hold back her feelings and shared a few details on what Inter Milan means to them. She said her client/husband is proud to play for the Inter shirt and is not just after money. She said she was proud of the fact that Icardi wore the InterMilan captaincy armband, which was once worn by club legend Javier Zanetti. Nara admitted that her husband still wants to play for the club, but any further contractual agreement willwill not come cheap.

Report has it that Icardi wants Inter to issue a public apology to him as he feels he has sacrificed a lot for the nerazzurri over the last few years. The situation has boiled over very badly of late, and Icardi’s social media posts have brought forward his unhappiness in this battle against the club, who stripped him off captaincy.

Things took a dramatic turn when team executive GiuseppeMarotta called the show. The Italian executive admitted that Wanda’s tears forced him to call the show, but he needed to clarify a few things to keep peace among all members of the nerazzurri family.Marottastated that an agreement has already been concluded to keep Icardi playing for the nerazzurri but now the ball is in Icardi’s court.